All About High-Speed Gondola Lifts

The technology behind a modern ski lift

In recent years high-speed gondola lifts have not only transformed the on-mountain experience for skiers but also finally allowed their non-skiing companions to see for themselves some of the amazing scenery they were hitherto denied. But as we’ll see, the advantages (and technological challenges) don’t stop there…

Getting up a mountain, by whatever means, is always going to involve someone in a considerable degree of effort and commitment — something which modern skiers are increasingly being spared, thanks to the adoption of high-speed gondola lifts. We travelled to Samoëns in the Grand Massif, French Alps, to find out just how a state-of-the art installation works. 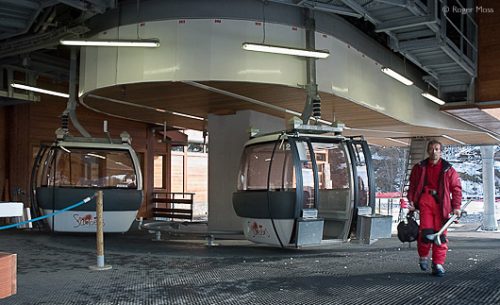 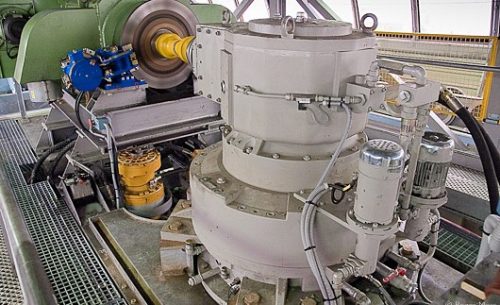 A rapid, high-capacity link from the village of Samoëns up to the heart of the ski area was first considered back in 1935, but only achieved 70 or so years later, when the necessary technology was perfected. Today at its maximum speed of 6m/sec the Grand Massif Express makes the 3km journey (with a 900m vertical ascent) in just eight minutes. Normal running with 95 cabins gives a capacity of 2500 skiers/hr, although at times of peak demand a further eleven cabins can be added, boosting skier capacity to 2800/hr. Conversely, in low-traffic periods the lift can run at reduced speed and with just fifty gondolas attached, economising significantly on energy consumption.

What makes this possible is the same trick which allows passengers to board and alight calmly in the loading area, before heading off on a high-speed journey up or down the mountain. As each cabin approaches the end of its journey it is met by a mechanism which releases the spring-loaded grip securing it to the main cable and lifts it onto the transport mechanism, where it undergoes a smooth, controlled deceleration. Once the cabin has safely reached the loading area a lever mounted above the cabin opens the doors, while the cabins continue their slow advance. Passengers have plenty of time to alight or board, stow or retrieve their skies, snowboards, etc.

Once each cabin has safely left the loading area the process begins again in reverse, beginning with door closure. Each cabin then undergoes a carefully-controlled acceleration to match its velocity to that of the cable, which has meanwhile continued its rapid progress around the giant horizontal pulley-wheel by which it is driven at both top and bottom stations. Once fully-synchronised, the cabin is simply lowered onto the cable and the spring-loaded release disengaged, to grip the cable securely at two points. During low-traffic periods cabins can be taken out of service simply by diverting (or ‘shunting’) them out of the slow transport system in the loading/unloading area and into a nearby garage area — much like diverting a railway wagon into a siding. Bringing them back into service is just as simple. 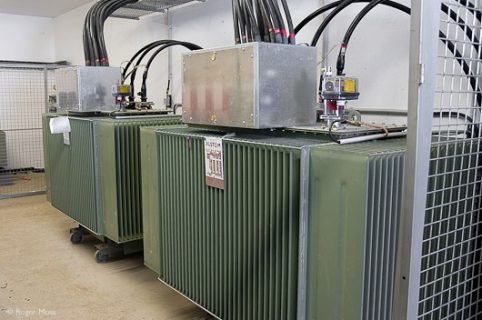 The main electro-hydraulic drive units run at 500V, stepped down from a 20kV supply, and consume around 645 Amps with an average passenger load. The lift operators’ screen displays (below) include wind-velocities monitored at each of the supporting pylons along the route — vital information for the safe operation of such a large, powerful lift.

As in all lifts, passenger safety is the number one priority area, and the sheer complexity of the high-speed gondola creates many areas to be monitored and maintained. In addition to the routine checks and maintenance carried out before the lift is opened each day, regular official inspections are carried out independently to ensure that every component continues to function perfectly. Since each cabin can weigh around 1.5 tonnes, the condition of the main cable is constantly and precisely monitored.

Official programmed safety inspections involve testing under controlled conditions, with each cabin carrying its maximum designed load (usually well in excess of the permitted passenger load). To achieve this rubberised ballast bags are loaded into each cabin and filled with a measured mass of water.
We are indebted to the management and staff of Grand Massif for their invaluable help during the production of this feature.

The link opened by the Grand Massif Express was first considered back in 1935, but it would be almost 70 years before the technology to make it possible was perfected.

In low-traffic periods the lift can run at ¾ speed and with only 50 gondolas attached.

Dual electro-hydraulic drive units run on 500V, stepped down from a 20KV supply. There’s also back-up diesel power to get passengers safely back down in event of a power failure.

The North American ski resort of Silver Mountain (Idaho) is accessed by what was billed as the World’s Longest Gondola. It was upstaged in 2009, though, when the Canadian ski areas of Whistler and Blackcomb were linked by the Peak2Peak Gondola.

Spanning an incredible 3024m (1.88 miles), this is the world’s longest unsupported span for any lift.

Meanwhile, back in Europe Austria’s Grindelwald-Männlichen Gondola Cableway, opened in 1978, also stakes its ‘world’s longest’ claim, with a journey of some 6071m. Not to be outdone, in 1995 Orelle opened the Trois Vallées Express, the World’s Longest Single-Section Gondola, whose 4942m length combined with a near-vertical ascent of 1471m, provides direct access to Val Thorens from the Maurienne Valley, in the French Alps. Three years later Les Angles, in the French Pyrénées, opened another World’s First, in the form of a gondola with 16-passenger cabins.

Thank you to the team at Samoens in the Grand Massif for helping us produce this feature. 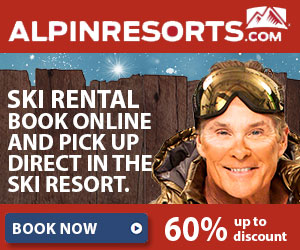