Home | Summer Activities | All About Via Ferrata

All About Via Ferrata

An historic sport growing in popularity

Via ferrata don’t require all the techniques of rock climbing, making them accessible to a wide range of people. In addition to the standard metal rungs and ladders there are also ‘Tyroléan’ and ‘monkey’ traverses, ‘Nepal’ bridges and other fun elements. In France via ferrata have become very popular with those in search of sporting activity, and there are via ferrata to suit all tastes and aspirations. That said, you should never under-estimate the great danger (with potentially extremely serious outcomes) of failing to follow simple, but fundamental principles.

Via ferrata rock faces are equipped with a range of artificial hand and footholds for progress. Added to this is a continuous metal cable fixed at regular intervals, providing a ‘life-line’ to which you are constantly attached. 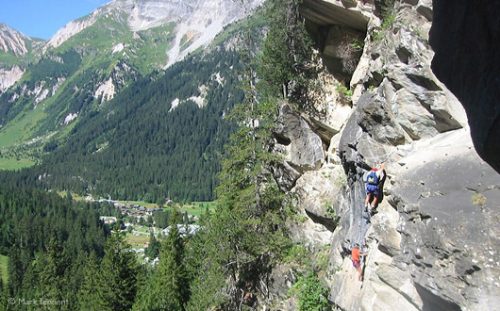 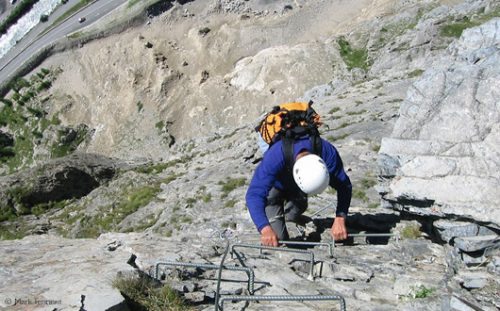 Where are the via ferrata?

France has a large number of via ferrata, mainly located in the Alpine regions, although they can also be found in Corsica and the Maritime Alps. There are now well over 100 via ferrata in France and the number is growing.

Typically sited high in the mountains, via ferrata sometimes reach the tops of peaks up to 2500m in altitude. However, some are located in almost urban settings, or in spectacular river gorges.

Who is the activity suitable for?

Via ferrata are suitable for anyone physically fit and active. Clearly you need a head for heights, but by choosing a suitable via ferrata the exposure (the feeling of being high up) can be reduced. The main advice is to choose a route that is within your capabilities.

Les Via Ferrata du Diable, Aussois. Seven sections – all different. has the world’s longest ‘via’ footbridge.

Roc du Vent, Arêches Beaufort.
One of the best. Difficult.

Via ferrata can be undertaken with children but should be chosen particularly carefully. Some via ferrata have been specially adapted by making hand and footholds closer together and cables are within easy reach. Children should normally be roped up in the same manner as for a conventional rock climb. This ensures that they can never accidentally unclip themselves from the via ferrata. It also allows the leader to provide additional reassurance from the rope – perhaps giving a ‘tight’ rope or a little assistance on more physical sections.

Via ferrata in France are graded in the same way as Alpine climbs (although the respective grades are not comparable). The easiest is PD (Peu Difficile – literally ‘a little difficult’). At the top end there is ED (Extrèmement Difficile or ‘extremely difficult’). The grade is a function of the ‘exposure’ (le gaz) i.e. the feeling of being very high over a large drop.

How physically demanding is the via ferrata? Is it very steep or even slightly overhanging (en devers)? Another factor to take into account when choosing a via ferrata is its duration. There are some which may only take 30 minutes, while others can take many hours, followed by a descent from a mountain top. Some via ferrata may have marked escape routes which allow you to either avoid certain sections or to cut the route short. 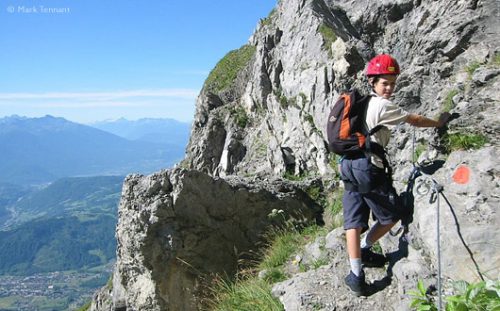 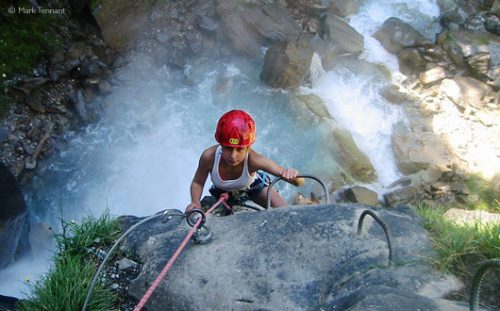 You may find your arms getting tired, so the ability to take a rest is useful. Some via ferrata sets have a third, short sling which can be clipped into a metal rung so that you can rest, (or take photographs). If your via ferrata set doesn’t have this you can make one using a standard climbing sling and large HMS / Klettersteig karabiner. This is only for resting and not used during normal progression since it is not integrated into the shock-absorbing system.

Let someone know in advance where you are going and when you intend to be back, or arrange to call them to let them know you are down and safe.

Thoroughly check your equipment each time for damage and wear and tear.

Remember you are only as strong as the weakest link in your party. The more people in the group, the longer the via ferrata is likely to take, and if one person is struggling physically the whole party will be delayed.

Check the weather forecast before you go. Being caught out in a thunderstorm on a via ferrata with a wet, metal cable is not something to contemplate. During the summer the weather in the Alps is often best in the morning. In the afternoon it is quite common for large cumulus clouds to develop, and these may go on to become thunderclouds. It’s best to make an early start so that you are down before any potential changes in the weather.

Mark has over 30 years experience of professional guiding and is a fully registered mountain guide who lives and works full-time in the Savoie region of the French Alps. He offers walking and trekking holidays, guided cycling, rock-climbing and snowshoeing as well as the popular sport of via ferrata.

To undertake a via ferrata safely you will need the following equipment, which can usually be hired in local outdoor shops.

The via ferrata system or 'set' is composed of two lanyards with large, self-locking karabiners. The lanyard then passes through a special device which, under heavy shock-loading, allows the lanyards to slip, thus reducing the high shock-loading resulting from a fall. These via ferrata sets can be bought or hired from local outdoor sports shops. NEVER use standard climbing slings or rope on their own. In the event of a fall they will almost certainly break, as they are not designed to withstand the shock-loading produced on a via ferrata.

Harnesses are of a straightforward design for rock climbing and don't need any fancy extras. Some harnesses are one-size, with both adjustable waist- and leg-loops. Young children may be advised to wear a full body harness which cannot slip down off the waist. If hiring, harnesses and helmets come along with the via ferrata set. 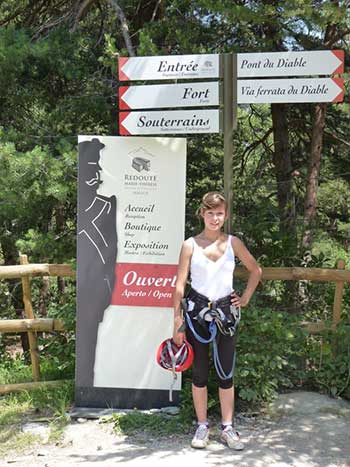 It is wise to always wear a helmet for protection – not only in the event of a fall, but also from any small stones which may be dislodged by parties higher on the route. In the same way, always be very careful not to dislodge small stones or pebbles. If you do accidentally drop something the standard British climbing call is to shout 'Below!' in a very loud voice or 'Attention!'

Required footwear depends to some extent on where the via ferrata is located. If the approach and descent are on good paths on relatively flat terrain you can wear a pair of training or 'approach' shoes. Otherwise it's best to wear a pair of walking boots which give additional protection to the ankles and security on steep paths.

No special clothes are needed – but remember you may be in the mountains where the weather can change quickly. Take a small rucksack with warm clothes e.g. fleece jackets, wind/waterproof jacket, hat and gloves, as you would wear when walking in the mountains. Take some spare food, energy bars and a water bottle, as you may get dehydrated. Don't forget sun cream and sunglasses.

Depending on the via ferrata's length and location, you might wish to consider a small head-torch, map and compass. Finally, to protect your hands, consider some leather finger-less gloves to protect from grazing and the occasional sharp ends of the metal cable.

History of Via Ferrata

Via ferrata (literally an 'iron way') were first created for recreational purposes in mid-19th century Austria though the origins of the modern via ferrata are attributed to the Italian army. During the First World War via ferrata were constructed in the Italian Dolomites so that troops could move equipment and artillery from one side of the mountain to the other. After the war, the army abandoned the routes and local people took to maintaining them, recognising their potential for attracting tourists to the area.

Origins of the name

The name via ferrata derives from Via Attrezzata meaning a fully equipped route with rails, ladders and cables. Later it simply became known as via ferrata.

Via ferrata in France

Via ferrata didn't appear in France until 1988, the first being in Freissinières (Hautes-Alpes) constructed by Lionel Condemine. It was introduced as a new experience for mountain lovers, providing both fun and adventure. France has since become the centre for the contemporary style of via ferrata, with well over a hundred routes, mainly located in the Alpine regions.

Always undertake a via ferrata in the direction ('sense') indicated in the route description or on panels at the start of the route.

Follow the 'country code' making sure you take all your litter with you; remember to shut gates and don't damage fences.

Follow any advice and directions given on particular via ferrata to avoid either endangering yourself or others.

Be polite and courteous to other users. If others come up fast behind you, be prepared to let them past. Just choose a good moment and then stay still and let them carefully pass you. You will not feel harassed.

Certain parts of the via ferrata, bridges for example, may indicate that you should only pass one at a time to avoid overloading the structure.

Via ferrata can usually be undertaken throughout the year, depending on the weather. However some are closed during the winter months – and may even have the safety cable removed.