The Col de Cayolle to Menton

We’re on the final stage of the Route des Grandes Alpes, a scenic touring itinerary following the mythical cols and valleys of the French Alps from Lac Léman to the Mediterranean sea. In this section we travel from the Col de Cayolle to Menton.

The ascent to the Col de la Cayolle (2327m) takes in a lofty stone bridge spanning a near-vertical mountain stream cascading over a boulder-strewn ravine. From the Col the views extend southwards over the Val d’Entraunes towards the Parc National du Mercantour and the Alpes Maritimes. As the Route descends through more hairpins and tunnels the influence of the Mediterranean becomes ever more obvious. If the tarmac is spotted with small black dots it’s an advanced warning that we might soon encounter a lone shepherd conducting his flock down from the high alpages to more sheltered winter grazing. The twice-yearly spectacle of transhumance is as moving as ever, and a timely reminder that this is still very much a living landscape.

…the descent into St Martin–Vésubie turns out to be one of the narrowest and most demanding sections we’ve encountered on our journey.

After passing through St Martin d’Entraunes and its near-neighbour Guillaumes we climb once again, this time up to the ski resort of Valberg, which greets hungry travellers with a welcoming ‘repas à tout-heure’ sign. Further on, as we cross the Col de la Couillole (1678m), we pass more modest family ski stations like Roubion, Buisses and La Colmiane. A dramatic swoop through the red stone Gorges de la Vionénet brings us to St. Sauveur-sur-Tinée, whose sinuous network of dark alleyways running between rugged, ancient cottages, represent a twilight world seldom discovered by tourists. Outside the town a tricoleur flutters proudly in the breeze above a small Ligne Maginot fort at the roadside. 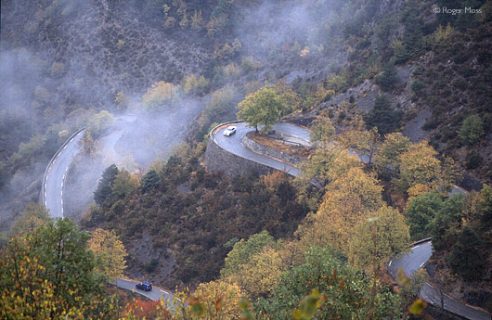 The intensity of the colours on the wooded, zigzag climb up to the Col Saint-Martin (1500m) is startling, and the descent down to St Martin–Vésubie turns out to be one of the narrowest and most demanding sections we’ve encountered on our journey. The Italianate village has a reputation as a climbing and mountaineering centre, acquiring the title of la Suisse-Niçoise among visitors from the Côte d’Azur. It has also steadfastly resisted over-commercialisation, with whole back-streets still awaiting the restorer’s attentions, while the unique 15th Century ‘gargouille’, created as an irrigation channel, still flows down the centre of rue Centrale. 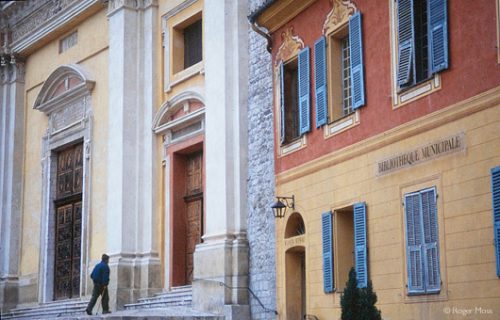 Below the village the Route relaxes briefly before spiralling upwards to the wooded Col de Turini (1604m), and another Corniche-style cruise through the Gorges du Piaon. Once through we plunge into Sospel, looking in many respects the classic Italian village. It’s also a place with a split personality; across the Bévéra river lies a medieval sector still accessed by an 11th Century toll bridge. Until the 18th Century revenues for the crossing, on the Route Royale between Nice and Turin, generated great wealth for the town. Eventually it created its very own sumptuous Baroque cathedral, dominating an elegantly-arcaded market square known as the Place St-Michel. So effectively is all this tucked away that most unsuspecting visitors simply pass through unaware of its existence. 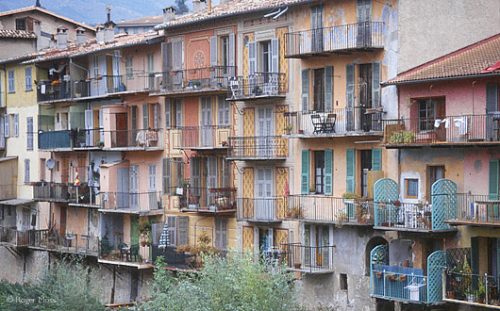 The climb out of Sospel brings a first glimpse of olive groves, reminding us that we’ve almost reached journey’s end. As if to prove the point, the Col de Castillon is a relatively modest 706m above sea level. But the Route is not about to give up just yet, the run down towards Menton launching off in one last series of tight hairpins. Here and there are remnants of the tramway built to provide an excursion link with St Martin-Vésubie, before the private car made it redundant.

As we pass beneath the elevated coastal autoroute we’re finally entering Menton and an altogether different world. If the Route has provided any kind of a test then this is the reward, and it’s a rich one. Overlooking the Mediterranean, and just a few hundred metres from the frontier with Italy, this really is quite some town. The Italians think so, too, judging by the number of visitors driving in each day. After parking on the quayside it’s time to gaze across at the famous old town.

For us it was touch and go, but we made it before the winter snows closed the high Cols. Even in summer, however, the Route des Grandes Alpes is an adventure, revealing a near-endless succession of extaordinary places just waiting to be discovered – and rediscovered. 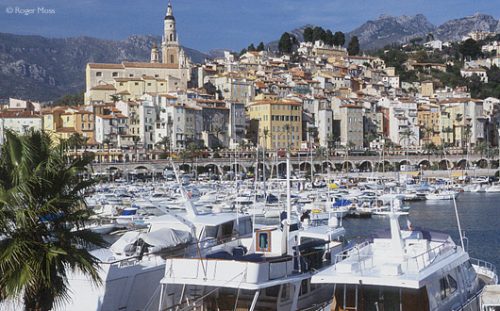 Origins of the Route

The Route des Alpes, as it was originally known, was conceived by the Touring Club de France in 1911, incorporating the spectacular high-altitude roads originally constructed to provide military access to fortifications protecting the Franco-Italian frontier.

Post-WWI technical improvements in braking and handling spurred a growth in private car sales, and during the 1920s the Route soon became one of Europe’s most celebrated touring itineraries. Early coach operators began offering excursions to high passes like Galibier and Lauteret, where hotels and restaurants soon opened to cater for early tourists.

The Route was finally completed in July 1937, with the opening of the 2770m Col de l’Iséran, the highest surfaced pass in Europe.

When is the Route open?

The Col de la Cayolle opened in 1913, allowing motorists to discover the wild, natural beauty of what is now the Mercontour National Park.

This forlorn Ligne Maginot Fort stands beside the Route near St. Sauveur-sur-Tinée, overlooking a meander in the river.

La Zourcière offers a gîte and B&B accommodation. Hosts, Mel and Liz also offer activity holidays and are on site to offer advice on walks and local places of interest.

A few steps from the centre of the village, this Logis de France Auberge offers accommodation in traditional French style.

This hotel restaurant has magnificent views. In October, the first snow was falling and the restaurant was a friendly, warm haven. Another Logis de France hotel, accommodation here is particularly good value outside the ski and summer periods.

This delightful hotel deserves its Logis 3 Chéminées rating. Book your table in the restaurant to avoid disappointment - the experience is not to be missed.