A taste for mountain living

Prior to the 14th and 15th Centuries the landscapes around Mont Blanc looked very different. Then local lords and church authorities decided to encourage the deforestation of vast areas of mountainside, the intention being to convert the land to pasture. Before long dairy farming was thriving and the area became renowned for its mountain cheese production.

Harsh weather and difficult terrain meant that agriculture developed according to the pattern of nature. This tradition is upheld in the region today where unique cheeses are produced according to the rhythms of the seasons and using methods passed down through generations of local farmers. 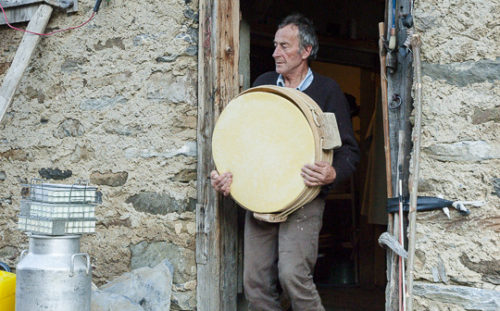 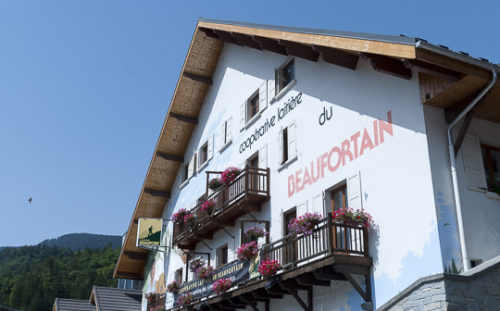 The Beaufort AOC covers about 450,000 hectares in the Beaufortain, Tarentaise and Maurienne valleys, plus part of the Val d’Arly. The area of production is characterised by vast areas of high mountain pasture known as alpages. About 11,000 Abondance and Tarine cows graze the pastures and produce the milk used to manufacture the cheese. About 10 litres of milk are required to produce a kilo of Beaufort cheese.

Around mid-June the herds leave the warmth of their winter quarters in the valleys and begin a long journey into the mountains, following the retreating snow-line and grazing on the fresh growth which soon appears. Along the way they are milked twice a day at mobile milking parlours bytheir herdsmen, who live in the alpages throughout the summer. Cheese produced in the lush summer pastures is known as ‘Beaufort d’Alpage’. ‘Chalet d’Alpage’ is a summer cheese produced from a single herd which grazes above 1500m altitude.

A great place to learn about Beaufort cheese is the co-operative dairy situated in the heart of the town of Beaufort. Visitors are offered guided tours and a shop sells produce direct to visitors.

Situated in the heart of Beaufort, the Coopérative Laitière dairy opens its doors to visitors who wish to see the production process and learn more about Beaufort cheese. The on-site shop sells the cheese at unbeatable prices.
See the Coopérative Laitière website for guided visit information and shop opening times. +33 (0)4 79 38 33 62 www.cooperative-de-beaufort.com

For detailed information about Beaufort cheese, the AOC and recipe ideas visit www.fromage-beaufort.com

For information about visiting the beautiful Beaufortain region in the Alps see www.areches-beaufort.com 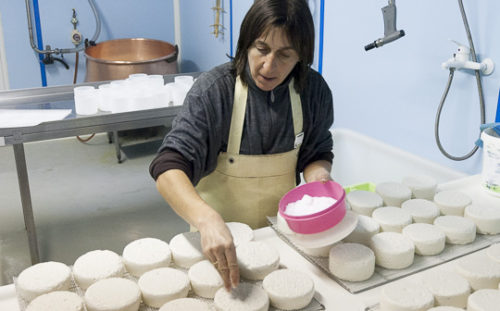 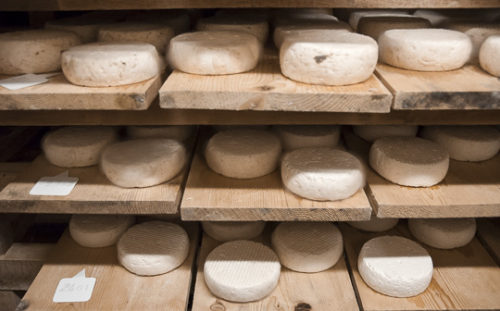 Situated at the heart of the Beaufortain region between Beaufort and the village of Arêches, the Ferme de Monsieur Seguin is run by two young couples Gisele & Thierry Bochet and Bérengère & Jean Yves Rochaix. They produce a goats cheese called Grataron d’Arêches, made from the unpasteurised milk from a herd of 160 alpine goats. The cheese is manufactured daily in the farm’s dairy. Thanks to the goats ability to feed on the mountain pastures and rocky outcrops, the milk they produce is extremely high quality. This enables the production of this rich goats cheese made to a recipe handed down through generations.

The goats spend the harsh winter indoors, feeding on hay from the pastures and giving birth to their kids in the shelter and warmth of the barn. As the snow retreats from the mountains the goats are taken to the high pastures where they will spend summer grazing the succulent grass and alpine flowers.

Increasingly rare (only a few producers remain), the Grataron d’Arêches is a soft-pressed, washed-rind, goat’s milk cheese with a very pale colour. It’s flavour is fresh and creamy, with a mild taste quite unlike other goat cheeses.

People are welcome to visit the Ferme de Monsieur Seguin where cheese is available for puchase.

Grataron d’Arêches is on sale at the Coopérative Laitière in Beaufort and local markets and served in local restaurants. 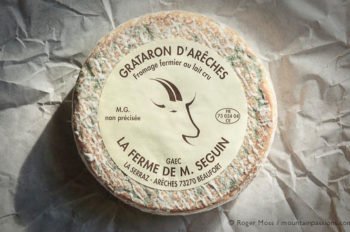 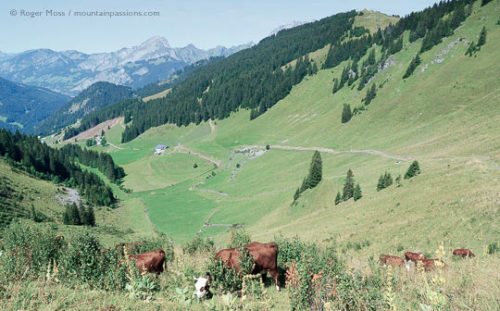 Abondance cows grazing in the Barbossine valley above Châtel 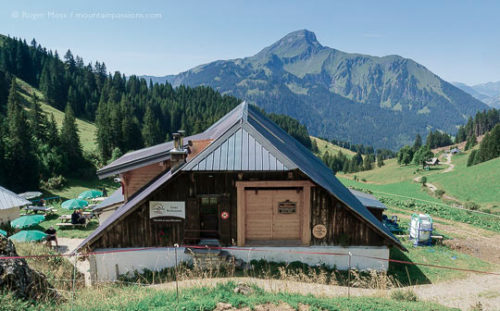 The Valley, the breed of cow and the cheese have all been named after the village of Abondance in Haute Savoie. In the middle ages monks produced Abondance cheese at the Sainte Marie d’Abondance Monastery, located near the Swiss border. Now it is produced on 60 farms and in 15 dairies, with a total of 200 farmers involved in milk production. 100 litres of full cream milk will produce one cheese weighing between 7kg and 12kg. Annual production amounts to about 1500 tonnes.

Since 1990, all the Abondance cheese production has been protected by the Appellation d’Origine Contrôlée (AOC) which guarantees the origin of the ingredients and methods of production. There are only three breeds of cow authorised to produce milk for AOC Abondance cheese: Tarine, Montbéliarde and the Abondance – the latter recognisable by their ‘sunglasses’ – dark patches around the eyes. The area in which the cheese can be produced is exclusively in the Val d’Abondance, in the north of Haute Savoie and extending to the Swiss border.

Find out all the facts about Abondance cheese plus some recipes and a list of producers www.fromageabondance.fr

To find out more about Abondance cheese visit the Maison du Fromage Abondance where you can see demonstrations, exhibits, and take a guided tour of the neighbouring cave d’affinage. Visits with tastings take place in July and August – contact the centre for details and bookings.

A typical dish made using Abondance is the Berthoud. Slices of Abondance are laid in ramekins or a shallow dish and melted under the grill with nutmeg, garlic, Madeira and white wine. The gratin is accompanied with bread or potatoes.

Chalet d’Alpage de Barbossine is open every day in summer (July 1 – 31 August) serving snacks and dinner made from their own Abondance cheese and local produce. Contact mobile: +33 (0)6 81 56 69 97 See more about our visit here www.mountainpassions.com/blog/ 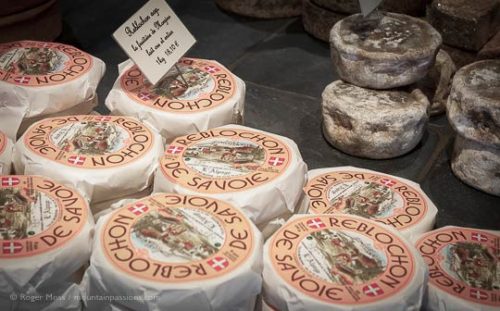 Reblochon cheese for sale in Morzine 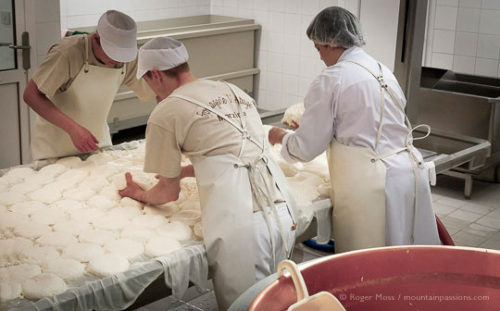 The story of Reblochon began in the 13th Century with a tale of secret pilfering. At the time, landowners, often monks or nobles, collected taxes from dairy farmers based on the number of pails of milk the herd produced each day. When the landowner turned up to collect the tax, the ingenious farmers would carry out an incomplete milking, thereby paying less money. The milk obtained on the second milking was smaller in quantity but very creamy and ideal for making cheese.

The name Reblochon comes from reblochaient, or re-milking. Although the cheese wasn’t made in great quantities until the advent of the tourism industry to the Alps in the 20th Century, it received its Appellation d’Origine Contrôlée (AOC) in 1958. Three breeds of cow used in the production of Reblochon are the Tarine, Abondance and the Montbéliarde. The herds feed on fresh grass and alpine flowers in summer and on hay during the winter. There are about 800 milk producers involved in the production of Reblochon. Many are farmers making Reblochon twice a day with just the milk from their own herds. The resulting ‘Reblochon fermier’ is recognisable by the green label on the cheese.

Other milk is delivered or transported to the nearest co-operative dairy and is made either by a small number of farmers within a commune (fruitier) or on a larger scale by a greater number of producers (laitier). Produce from both is identified by a red label on each cheese.

Made from full cream milk, the cheese is uncooked, just lightly pressed and slightly salted. Reblochon is matured in caves where its texture and taste develops. It is then wrapped in waxed paper and packaged in a wooden container to maintain the humidity and condition of the cheese. Made in rounds of about 14cm diameter and a few centimetres thick, each weighs about half a kilo. The rind is saffron yellow and covered in a fine white bloom. Inside, the cheese is ivory in colour with a velvety texture and a subtle, nutty flavour.

There’s plenty of information about the history and production of Reblochon, recipes, images and content for school projects at www.reblochon.fr

You can visit individual Reblochon producers, many of them welcome you to see the production process, and will sell you cheese made on the farm. The Fruitière de Morzine offers guided visits and has a restaurant where they serve their cheeses and other local produce. See our Morzine ski review for more details.

Probably the most classic mountain dish using Reblochon is the tartiflette, a combination of cheese and potatoes baked in the oven and served hot, often accompanied by a fresh green salad.

Formerly known as “pela” in the local patois, this dish is part of Savoyard heritage. Simple to prepare, the Tartiflette is a wonderful marriage of rustic flavours that is both hearty and delicious. Here’s a vegetarian version but you will often find it cooked with added lardons (chopped belly of pork or bacon).

Make alternate layers of potatoes and slices of Reblochon in a dish. Sprinkle each layer with salt, pepper, some garlic and chives. Place in a hot oven for 10-15 minutes then pour on the crème frâiche and leave to cook for several more minutes. Serve warm with a green salad and a glass of Savoie wine.

Julia began her skiing in Courchevel and has since skied extensively throughout France and Canada. Apart from building and maintaining MountainPassions.com, she writes all the essential information for the ski and summer resort reviews and gives Twitter and Facebook followers regular updates and travel tips.