We’re no strangers to the Portes du Soleil, having skied from Châtel, Les Gets, Morzine and Avoriaz. All the same, we’re intrigued to see how everything looks and feels in summer.  Our apartment accommodation at CGH Les Chalets d’Angèle in Châtel holds happy memories and overlooks the Dranse valley. It’s just a short ride downhill from there to join the Sentier des Bords de Dranse, meaning Dranse riverside trail. 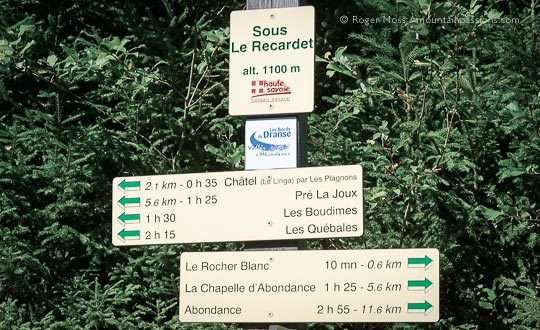 Bike route and footpath signage shows both times and distances

The Sentier des Bords de Dranse is a 20km trail which follows the course of the river down the valley to Abondance. Equally accessible to walkers, it’s an easy trail and the perfect way to get right back to nature with the minimum of effort – just the kind of thing our hybrids – ‘VTCs’ – were built for. The initial quick run down through a tract of forest is about as steep as it’s likely to get, and we’re soon onto a near-flat path with the river dancing and flashing on our left. 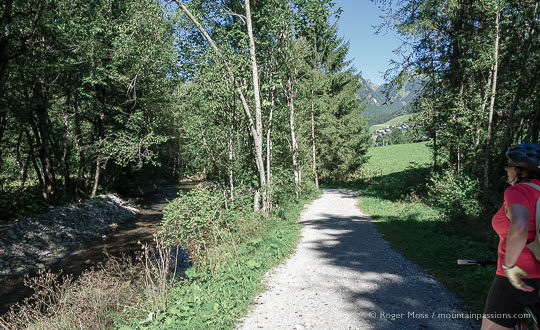 The cycle trail runs alongside the river Dranse.

On our right is a now-grassy expanse which we’d previously crossed in glacial temperatures behind a team of sled-dogs. Today, though, we’re glad of some tree shade as we roll with little effort and in near-silence beneath a cloudless sky. The relaxed run continues, with a few photo stops, until we’re level with La Chapelle d’Abondance, where we turn off, stand on our pedals and power our way up to the village in search of an unhurried coffee and croissant break.

We don’t have to go too far to find just what we’re looking for: Le Fournil. The service is friendly and the range of fresh-baked breads and pâtisserie mind-blowing. One coffee and pastry later and we reluctantly leave the shady outside table and hop on our bikes to get back on the trail. 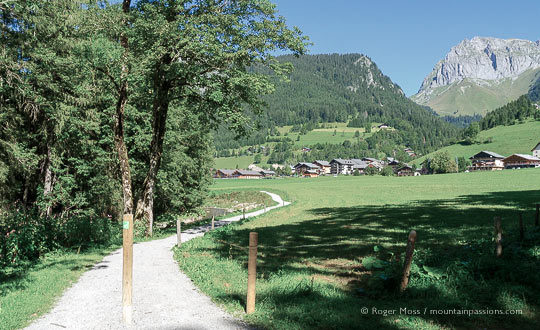 The riverside trail passes the village of La Chapelle d’Abondance

The only way is down. And then…

We’re around the halfway point along the route (altitude 970m), so after rejoining the path back at the riverbank we resume our leisurely, slightly downhill run towards Abondance. Along the way we pass a few walkers, a lone runner and a couple of other bikers, but mostly it’s just us, the river – more a broad, shallow stream, really – and a perfect summer day. We’re still in the mountains, though, and to prove the point we eventually round a bend, part company with the Dranse and meet a short, steep climb which defeats even our lowest gears. After a quick push we’re on the flat again, re-mounting and gazing around us at a changing landscape. 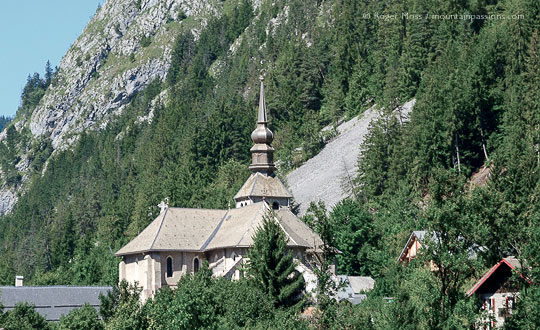 The onion spire of the abbey church in Abondance

Alpine cheese, and an onion spire

By now the once-broad valley has narrowed and the surrounding peaks feel as if they’re closing in. Everything is vibrant green, however, and spread across their billowing contours are fertile Alpine pastures bounded by dense tracts of larch and pine forest. The track, though, remains relatively flat, and ahead of us we glimpse the familiar Savoyard ‘onion’ spire of the Abbaye d’Abondance, founded in the early 12th century. The track passes farm buildings, a few chalets and the local garage before emerging in the heart of the village. It’s an attractive spot, but is already starting to wind-down for midday, so we pick up some local AOC Abondance cheese, a fresh baguette and cold drinks. 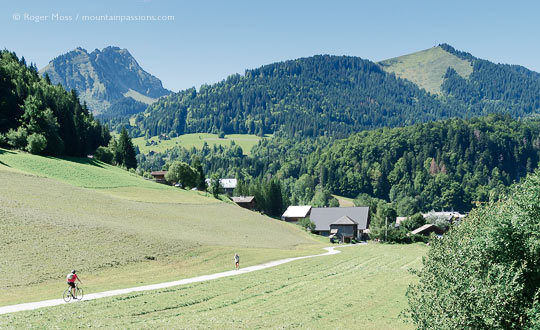 Things move at a relaxed pace, as summer visitors ahead of us get the full cheese dégustation experience, but once we’re provisioned it’s time to look for a picnic bench. Experience has taught us that a shady one can be a big ask in the mountains, so we try riding up to the nearby Esserts gondola ski-lift, currently in summer hibernation, which might just offer some welcome shade. It’s a pleasant but ultimately fruitless detour, so we decide to head back to a bench we’d spotted beside the track which brought us here from Châtel. Again there’s no shade, but it’s vacant and a great spot in which to reflect on the trip.

The Sentier des bords de Dranse probably won’t suit most of the riders who come here for a white-knuckle challenge. Instead it offers the perfect way to ease into the most natural of surroundings, with plenty of time and distance to enjoy them. Getting back to Châtel is undemanding, too, with the option of a shuttle bus return ride if time is tight or weather conditions suddenly deteriorate. We’d do it all over again in a heartbeat.