Not far south of Briançon lies the beautiful Vallée de l’Ubaye, accessed today via the 2109m Col de Vars, a classic climb in the Tour de France. However, further along the mountain ridge lies an earlier, much higher pass created by the military to service the garrisons of French troops which for centuries defended the valley against attacks from neighbouring Italy. Long since abandoned, the lost Alpine route scaled the wild, rugged Massif du Parpaillon and still appears on larger-scale maps. Was it, I wondered, still possible to follow the Route du Parpaillon from end to end? Attempting it on a mountain bike seemed like the ideal way to find out. 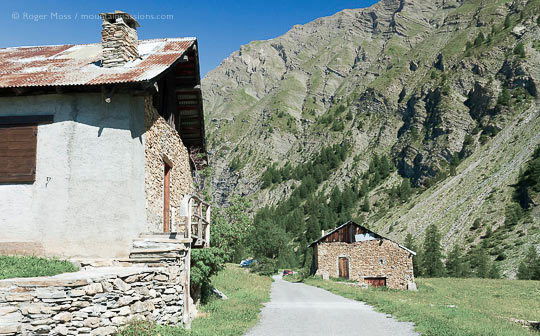 The final stretch of tarmac, above Sainte-Anne-la-Condamine.

The route begins as a gravel track among lush wildflower meadows high above the village of La Condamine-Châtelard at the eastern end of the valley, and soon enters dense, echoing forest. An uphill slog on this wooded section brings me to the Pont du Bérard, beside a craggy cascade, followed by a steep hairpin climb. It doesn’t ease until I finally emerge from the forest to confront Buvette Grill le Petit Clausis – a cheerful cabin-style refreshment bar for walkers following the GR 6 footpath. Resisting its temptations, I press on over a rugged stone and timber bridge spanning the Ruisseau du Parpaillon, a mere stream until the winter snows melt. 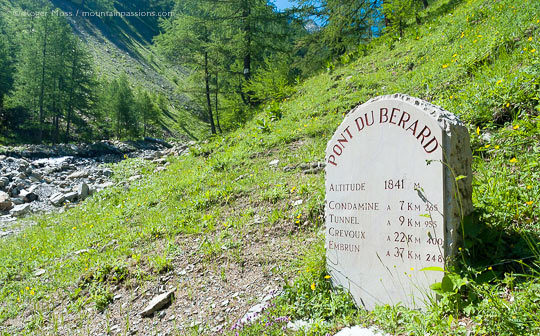 Key information for travellers in an idyllic, sheltered spot on the route.

Now things really open out, the rough track ahead laid out like a dull grey ribbon following the contours of the steep valley sides, and there’s an surreal feeling amid a landscape of dull, bleached-out shale showing through grass struggling to thrive beneath the burning summer sun. The relentless climb makes progress painfully slow, but the scenery becomes ever more startling, with few clues as to the route’s former importance. 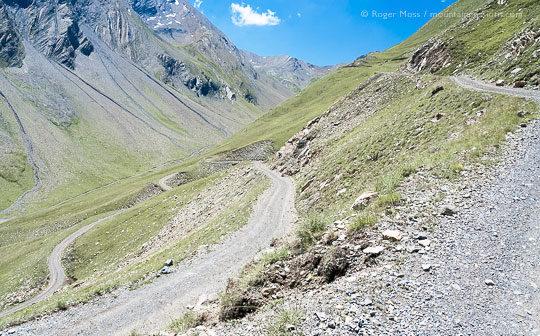 The hairpin climb to the tunnel – from now on things get even rockier.

Higher still the route tightens into a seemingly endless hairpin ascent, repeatedly crossing and re-crossing a deep gully gouged by torrents of rain and melt-water. Spanning it are primitive timber bridges with gaping holes and sagging, time-worn timbers; in these exposed conditions nothing has an easy life. I press on, though, and eventually rounding the final bend of the climb, to glimpse the legendary Tunnel du Parpaillon, looking insignificant amid the vastness of the surrounding landscape. My final burst of energy produces a stirring round of applause from a large group of Italian hikers. 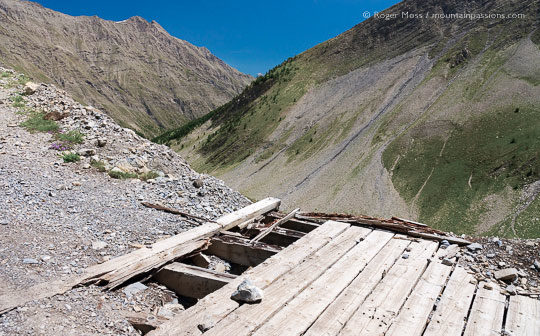 An air of abandonment adds to the sense of remoteness.

After the tough climb I dismount thankfully and begin to take in the incredible surroundings. The tunnel entrance records its constructors and the altitude: 2643m (almost 9,000ft) almost certainly makes this Europe’s very highest road tunnel. Looming above it, the Col du Parpaillon sits on highly unstable terrain, and keeping the pass open during winter proved impossible, so the tunnel was bored through the rock 60m or so below the ridge and opened in 1901. 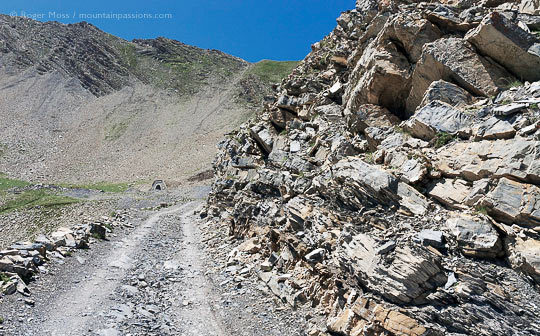 A first glimpse of the tunnel, below the Col du Parpaillon.

Beyond a pair of huge steel doors lies total darkness, with an eerie sound of water dripping from the rocks of the tunnel roof, but I’m determined not to turn back, so don a thermal fleece from my back-pack, along with an LED head-light, then climb back on the bike and select a low gear. After launching off into the tunnel I ride at a steady pace, to keep moving through the deep pools of water I can barely see and to aid stability if and when I hit the expected sheet ice. 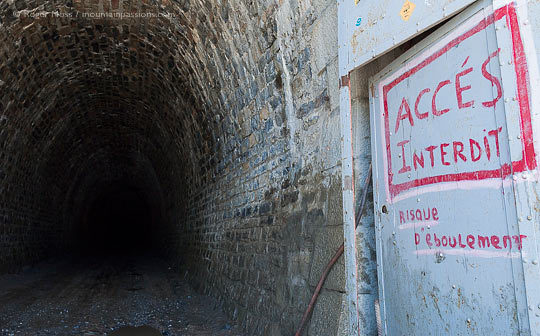 A few metres in it’s total darkness, with glacial temperatures.

The cold inside is intense and the darkness becomes total, and since the tunnel curves throughout its 468m length, the exit is hidden until you’re some way in. Eventually, though, I focus upon a  tiny white dot, block out thoughts of what might be hanging in the darkness overhead and manage to keep moving when I hit patches of ice. 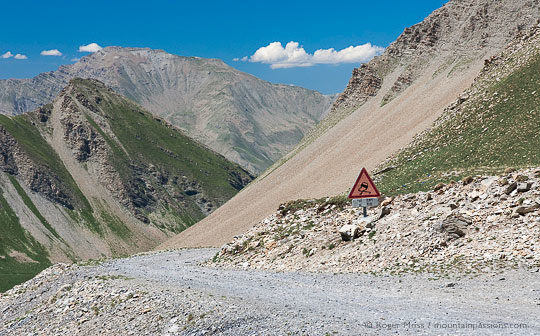 The northern descent from the tunnel is much gentler.

I finally reach the warm sunshine with a sense of elation and personal achievement. A young Italian cyclist and his girlfriend, looking doubtful, ask me if its safe to ride through, but decide against it. For me, though, it’s all behind me, and I focus instead on the beauty of the very different landscapes which are now unfolding ahead. 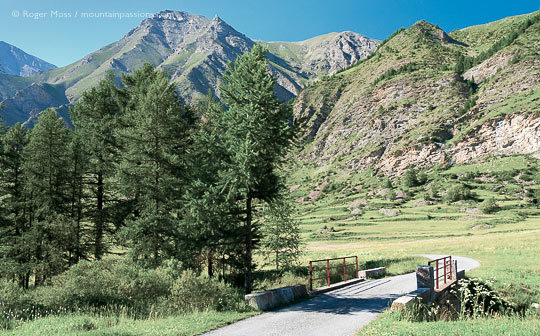 The softer side of the Route du Parpaillon in summer, just above the village of Crevoux.

Now it’s all downhill on a stony, unsurfaced track swirling between mountain pastures filled with Alpine wildflowers. Things are much softer on this side of the mountain, the picture-postcard mountain imagery adding a whole new dimension to an epic journey. Eventually, I cross a fast-flowing stream, pass a few rugged stone cabins and enter silent conifer forest. Minutes later the gravel gives way to tarmac before crossing the Torrent de Crévoux above a broad valley above the authentic-looking hamlet of La Chalp. After a streamside descent to the village of Crévoux I pause beside a faded plaque recording the completion in 1891 of a major section of the Route Militaire du Parpaillon by the 6th Group Alpin. Their great adventure made it possible to undertake mine.

Italian walkers take in the startling scenery below the Col du Parpaillon. 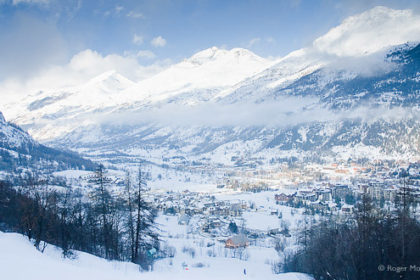 Skiing another side of Serre Chevalier… 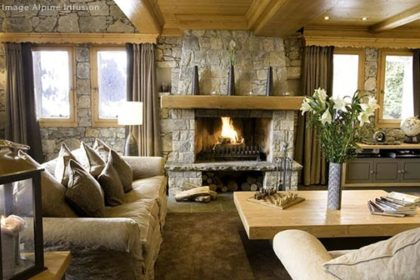 5 Tips for Having A Luxurious Ski Holiday Experience 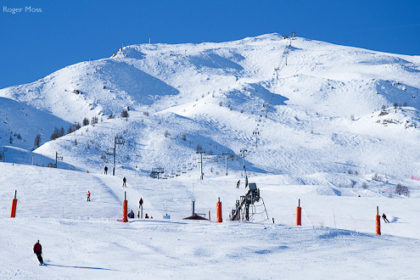 We've started featuring some great ski deals for the coming season including brand new apartments in La Plagne and luxury accommodation in Tignes 1800, offered by Peak Retreats and Ski Collection. Check out our dedicated page at www.mountainpassions.com/winter/news-offers/ski-deals/latest-ski-deals/ ... See MoreSee Less